Stewards of the sea featured in local surf documentary

Keep your eyes peeled for “The Cigarette Surfboard” this summer as filming wraps up in California and heads to surf destinations around the globe. This locally produced documentary, slated for release next year, is not your average surf flick. For starters, the 5-foot 4-inch twin fin that inspired the film is not your average surfboard: The aptly named “Roach Tail” is comprised mostly of cigarette butts. And you won’t see Taylor Lane, a central surfer in the film, boosting airs—especially not on a board that weighs 17 pounds (about twice as much as a modern surfboard).

“The trajectory of the film follows a guy that’s a designer and an average Joe sort of surfer,” says videographer Ben Judkins, of Lane.

An industrial designer, Lane had limited experience shaping surfboards when he entered the 2017 Vissla & Surfrider Upcycle Contest. His friend, Judkins, winner of several local film awards, documented the process of bringing Lane’s vision for a surfboard built from recycled materials to fruition.

The design for Roach Tail utilizes upcycled materials like styrofoam coolers, EPS rail cut-offs, fiberglass scraps, and old fabric, however, cigarette butts form the main constituent of the board’s foam core. Cigarette filters are made from cellulose acetate, a plastic that will never biodegrade, and used filters contain toxins like cadmium, arsenic, and lead. Trillions of cigarette butts are littered around the world each year. Most of them end up in water systems—and ultimately, the ocean—poisoning fish and other marine life.

Enlisting the help of Save Our Shores and Surfrider’s San Francisco Chapter, Lane and Judkins procured 10,000 cigarette butts from local beach cleanups. Drawing from the structural design of contemporary wooden surfboards, Lane built a frame modeled after the iconic twin fin developed by Steve Lis, and pressed the butts into it with a potato masher. Like a surfboard chef inventing a wave-riding version of wasabi spuds, Lane created an ecological statement with serious wow-factor. Roach Tail not only took first place in the contest, the story went viral, getting picked up by sports networks like Surfline and the Inertia, as well as mainstream news media such as NPR, New York Times, LA Times, Chicago Tribune, ABC, NBC, and CBS.

“We saw the cigarette surfboard as a catalyst for something bigger,” remembers Lane. In the wake of all the press, Lane received invitations to present at various events, including the upcoming We Love Green Festival in Paris (June 2-3). “We really felt that we could use the surfboard as a platform to talk about ocean pollution,” says Judkins. Together, the two launched an Indiegogo campaign, and ultimately raised $21,851 to produce “The Cigarette Surfboard” documentary.

Three more cigarette surfboards are in the works to be featured in the film: a lighter version of Roach Tail, a single fin step-up, and a bonzer (the predecessor of the modern thruster, designed by the Campbell brothers in the 1970s). 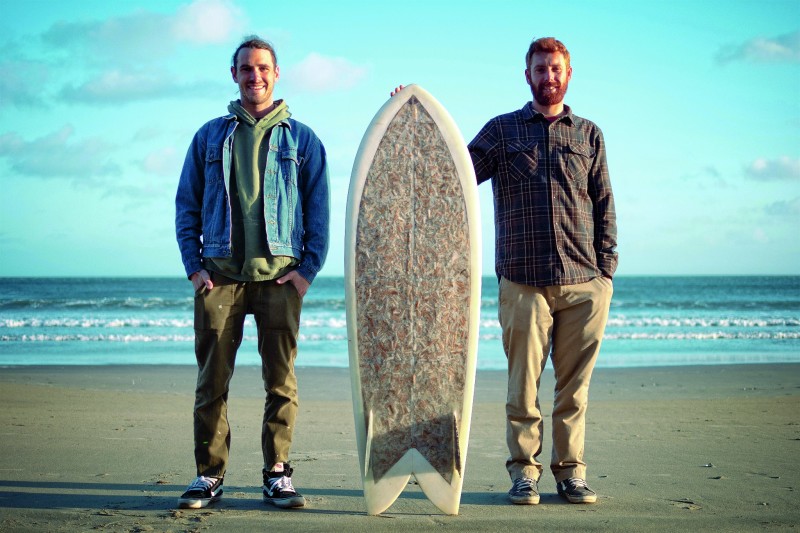 Lane and Judkins invite internationally acclaimed surfers to ride these classic shapes at a handful of breaks around the world, drawing connections to the origins of surfing, and the sport’s inherent link to a relationship with—and respect for—the ocean.

Using a Panasonic GH5 as his primary camera, and additional videographers for water photography and drone footage, Judkins weaves dreamy surf cuts into an ecological narrative.

The bulk of “The Cigarette Surfboard” is dedicated to finding creative solutions to ocean pollution. Working with scientists, entrepreneurs, and politicians, Lane and Judkins highlight technological and ecological innovations to this global problem. “The film is a call to action,” says Judkins. “Whether it’s picking up plastic, organizing beach cleanups, or influencing legislature, we want to provide tools and inspire people.”

Hawaii-born scientist Cliff Kapono plays an influential role in the film as both a talented surfer and an accredited chemist. Testing the toxic ‘butt juice’ of the cigarettes in Roach Tail, Kapono explains the effects of this type of pollution on the ocean. He also discusses the steps that people can take to help rehabilitate it.

“Surfing has always been a sub-culture sport, but it’s in transition, becoming an internationally popular thing to do,” points out Lane. “We want to help people understand what it means to be a surfer. And encourage surfers to think about our responsibilities, both in and out of the water.”

Lane and Judkins hope that “The Cigarette Surfboard” will incite surfers to be leaders of meaningful change in the ways that humans affect and interact with the ocean, and unite both surfing and non-surfing audiences as stewards of the sea.