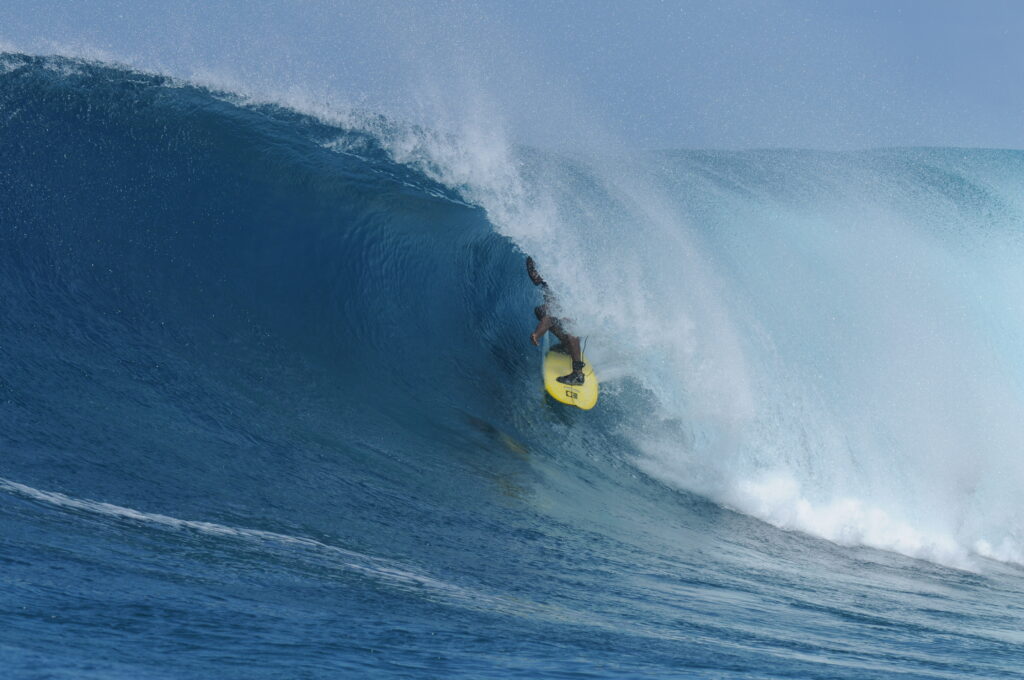 When Sterling Whitley first attempted to paddle out at Cowell Beach in the late 1950s, a group of surfers told him he had no business there.

“Anybody can surf the waves. The waves are free,” replied Whitley, who is Black.

“You just go out there and see what happens,” the surfers responded. Whitley decided not to find out, and gave up on surfing rather than face harassment.

Though this exchange may not sound remarkable to anyone who has ever been rejected from a Santa Cruz lineup, keep in mind that it occurred in a different era: when the waves at Cowell’s were still relatively empty, before the surfing hype of the 1960s gave rise to the particular brand of localism that is rampant in surfing today.

Whitley himself was a local, having moved to Santa Cruz in 1952 to work at the cannery on Seabright Avenue. He lived in a boarding house near Shopper’s Corner—the only place in town available for Black people to rent. Living anywhere else “would have been a problem,” he explains. At the time, he says people of color were relegated to places like Watsonville or the circle streets on the Westside of Santa Cruz. The water was more accessible to non-whites than in Southern California, where Blacks sequestered themselves to a spot called Inkwell Beach instead of risking endangerment at predominantly white beaches, and across the United States, where public swimming pools were still segregated. Santa Cruz beaches were open to people of color, and according to Whitley, Black people were allowed to use the swimming pool at the boardwalk; however, they were not permitted to jump off of the diving board. 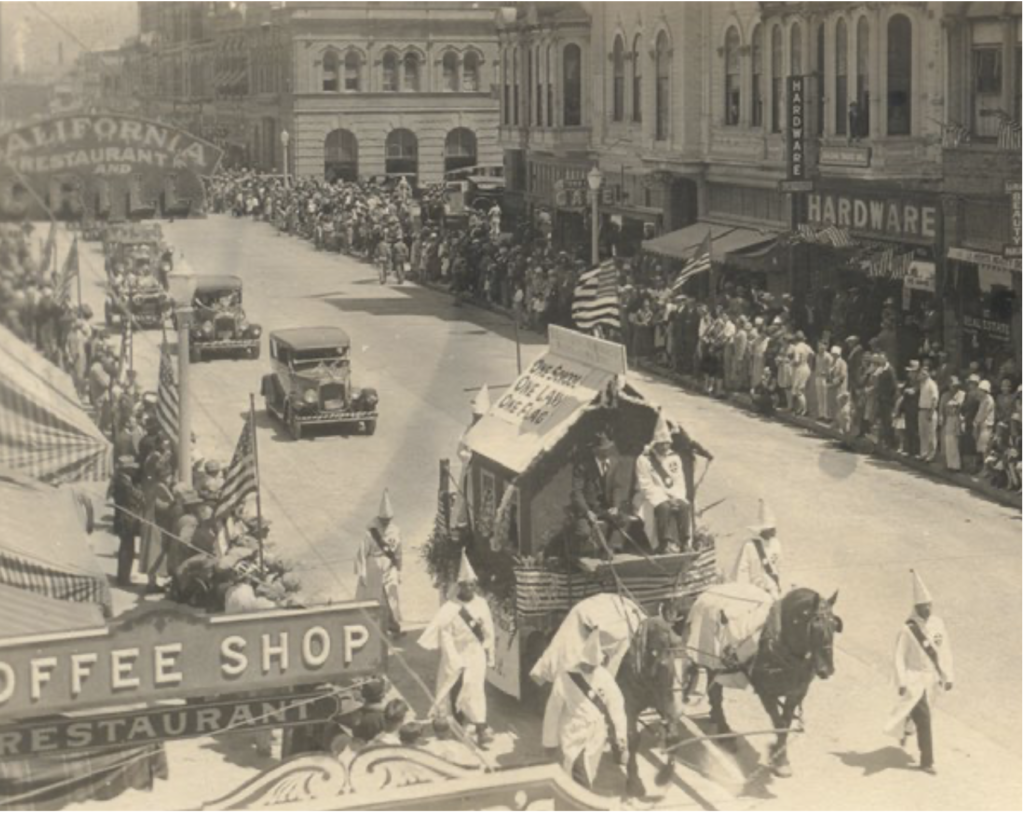 The Ku Klux Klan is photographed marching down Pacific Avenue in Santa Cruz in the city’s Fourth of July parade in 1947 with a flag that said “One School, One Law, One Flag.” COURTESY OF THE RONNIE TRUBEK IMAGE COLLECTION

Despite its liberal and progressive image, Santa Cruz, like the rest of the United States, has a history of racism. In 1922, Ku Klux Klan organizers arrived in Santa Cruz County, with Jews and Catholics as their primary targets. According to local historian Sandy Lydon, there was at least one Klavern in Watsonville, one in Santa Cruz, and several in Live Oak. Beginning in the 1920s, developers and realtors wrote racial covenants into the deeds of many new homes in Aptos, Scotts Valley and Santa Cruz, which stated that the premises “shall not be rented, leased, or conveyed to, or occupied by, any person other than of the white or Caucasian race” with the exception of “domestic servants of a different race domiciled with an owner or tenant.”

Systematic denial of access to housing, also called redlining, was enforced not just legally, but also socially, through intimidation and violence. A local example is Rev. William Brant, a Black pastor who made a down payment on a Live Oak house in 1951. Arsonists set fire to it the night before he was scheduled to move in.

Racism doesn’t end at the water’s edge. If people of color were denied access to housing in the 1950s, it follows that they—like Whitley—would also be denied access to surfing. Still, many people in Santa Cruz (including Whitley’s daughter, Brenda) maintain that localism is targeted more toward people from out of town than it is at people of color.

“The localism thing has nothing to do with race, it’s really more of a surfing culture thing,” says Richard Schmidt, a white surfer who was born in Santa Cruz in 1960. He has traveled all over the world to surf, and sees localism as directed primarily at people who don’t follow surf etiquette. “I don’t really think that surfers are racist,” he says.

However, localism and racism are more closely related than people think. Redlining prevented people of color from building wealth through real estate equity, and establishing roots in coastal communities. If certain families were prevented from living here, how could they ever be from here?

Mike Pitt, another white surfer who was born and raised in Santa Cruz, thinks that localism and racism essentially share the same construct. “Both are ways to maintain superiority in a situation,” says Pitt, pointing out that each system is based on a sense of entitlement and a system of hierarchy designed to benefit a specific group of people. “When you try to explain localism and the way things work to someone who doesn’t surf, it sounds kind of messed up—because it is.”

“Especially in America, localism and racism are intertwined,” says Kayiita Johnson, a Black surfer who lives in San Jose and regularly paddles out at Pleasure Point. “The idea of preserving things in the community for the community would have been OK if from the inception of the U.S., Native Americans had been treated as equals and everyone had the same level of access and resources, but that’s not what happened.”

For this reason, he thinks Santa Cruz should be more welcoming to people from other areas. “The reality is that the ocean doesn’t belong to anybody. It’s public,” he says. His Instagram account @black.surfers has received enraged commentary from staunch defenders of localism, and also from people who claim that surfing is colorblind. “People who say they don’t see color are ignoring the policies, history and structural racism that led us to this point,” Johnson says.

A resident of Santa Cruz County since 1965, Gary Croft—whom readers may know by his former surname, Cocroft—is a standout who surfs triple-overhead waves, takes off deep and makes the drop. He has managed to accumulate the two forms of wealth that matter in Santa Cruz surfing: skill and seniority. Still, “people make assumptions about me based on my skin color,” admits Croft, who is Black.

Other surfers who haven’t lived here as long as Croft sometimes take off in front of him, assuming that he won’t make a wave, or that he isn’t from here and thus doesn’t deserve a turn in the rotation. Some express shock when he mentions that he shaped the surfboard they are riding. Despite these experiences, Croft claims that “on the whole it hasn’t been a big problem.” Other surfers are quick to defend him as a local whenever there are incidents in the water. However, he acknowledges that this kind of racial profiling makes it exceptionally difficult for people of color who come from out of town to surf. “It’s easier to fit in and pass as a local if you’re white,” he says. “Surfers of color get flagged.” 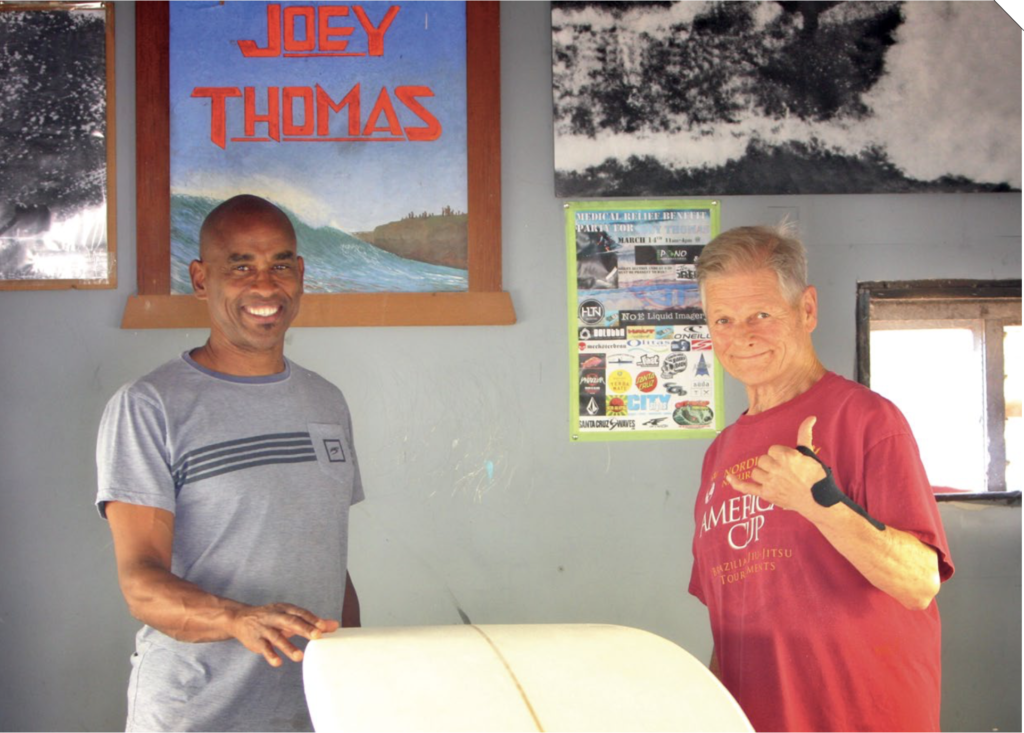 Gary Croft and his mentor Joey Thomas in the shaping bay.

Chelsea Woody, who moved to Santa Cruz in 2015, wonders if she will ever be fully embraced by the community. She says that her husband, “because he’s a white male, felt comfortable paddling to the top of the peak even as a newcomer. After he does it enough times, he will be tolerated.” Woody, a Black woman, does not feel that the same is true for her.

She co-founded Textured Waves, a collective that celebrates women surfers of color, to document and give visibility to a demographic that is generally unseen in the surf media.
Growing up in Orange County, Kevin Craft, a Black surfer, learned how to navigate racially non-diverse places before moving to Pleasure Point in 1998. He thinks that this background, along with the fact that he already knew how to surf and skateboard, helped him fit in. “Once people got to know me, it was all love,” Craft remembers. Though his experience of the Santa Cruz surfing community was positive, he says the region is known among people of color for being racist. “In African American communities in the Bay Area, Santa Cruz has a reputation for being intolerant to outsiders,” he says. “Numerous Black people commented on the racism they experienced here when I tell them where I’m from.” Craft relocated to Los Angeles County a few years ago, where he’s observed even more intense localism in Palos Verdes. He says he’s noticed a correlation between heightened localism and racism in California surf towns. “Places where there is more localism … also seem to be more racially intolerant,” he says. “This is definitely the case with Palos Verdes, or at least Lunada Bay.”

Though Whitley and his wife, Carrie Whitley, own their home in Santa Cruz, and enjoy close relationships with their neighbors, racism is still a part of their lives. It comes in different forms: subtle, like when they were initially denied a home buyer loan; and overt, like when Carrie was verbally accosted by a customer who refused to be served food samples by a Black person at Costco, where Carrie worked from 2005 to 2012. “You can try to create laws, but people will be resentful,” Sterling Whitley says. “People need to change what’s in their hearts and that takes time.”

Following the killing of George Floyd, numerous paddle-outs were held across Santa Cruz County to demonstrate solidarity and support for people of color. In addition, many surfing publications made a point of featuring Black surfers. Though the paddle-outs helped promote diversity and inclusion, more must be done in the surf community to help dismantle systemic racism.

Understanding historical inequities and how
they have shaped localism and persistent inequities today is an important step. Consistently featuring people of color in surf media (not just when it’s trendy) will provide representation and role models for an underrepresented group. Santa Cruz can expand existing programs, like local surf clubs and junior guards, to make them more accessible to people of color. Croft suggests that locals act as mentors and advocates for people of color, to help them feel more comfortable in a predominantly white community and a largely white sport.

“The most important thing is learning how to be an anti-racist,” Johnson says. “When you get out of the water, what are you doing to make sure that the infrastructure is less racist?”