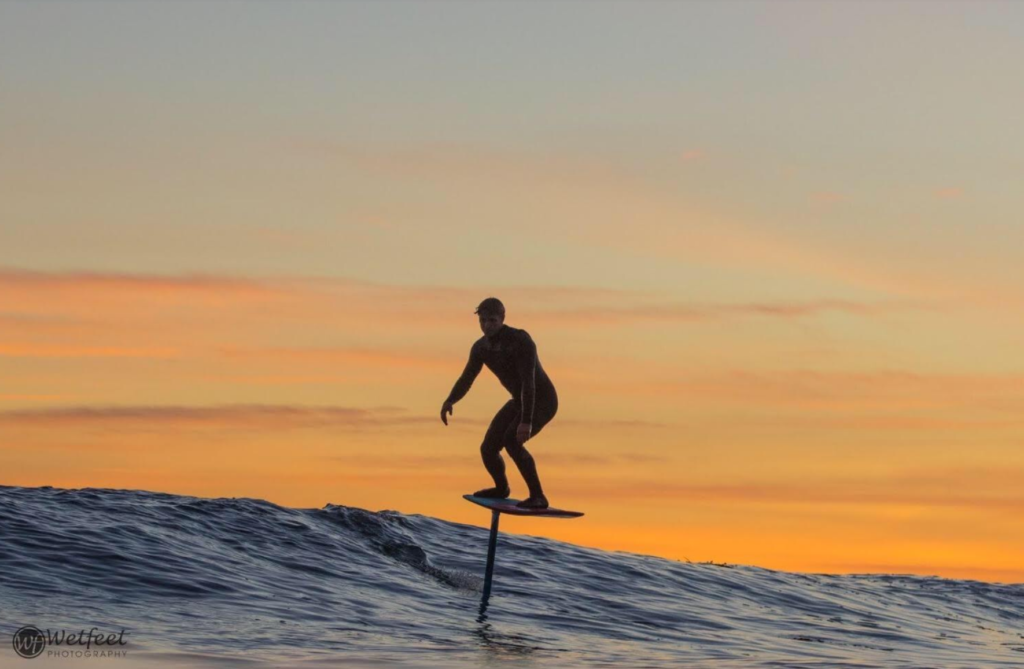 “It’s funner than surfing Mavericks,” claims Tyler Conroy, a regular at Mavericks. We are driving up the coast to go surf foiling, a sport I have never tried but Conroy has been obsessed with it since he first set foot on a hydrofoil surfboard two years ago. A hydrofoil is comprised of a long metal mast and two sets of wings that attach to the bottom of the board and allow it to lift above the water. “You feel like a bird,” Conroy says.

Conroy is an ambassador for F-One Foil, a global company that produces hydrofoils, kites, and boards for a variety of watersports. Founded in 1996 and based in France, F-One got its start producing kiteboards. The company expanded to pioneering kites in a range of different sizes, and developing a proprietary kite with a delta-C patent, which is now the most widely sold kite in the world. About 10 years ago, kite racers began experimenting with hydrofoils to increase speed, and F-One began engineering kite foil designs. At the time, only one size of hydrofoil was available; however, the company developed a series of products that opened up the market to amateur kiters and made the sport accessible in lighter winds (since foil creates less drag on the water).

With the development of its hydrofoil line, F-One expanded beyond kiteboarding to include surfing, stand-up paddle (SUP), windsurfing, wakesurfing, and the relatively new sport of wingsurfing. “We went from one category to six categories in a few years,” reflects Nico Ostermann, F-One’s North American distributor. 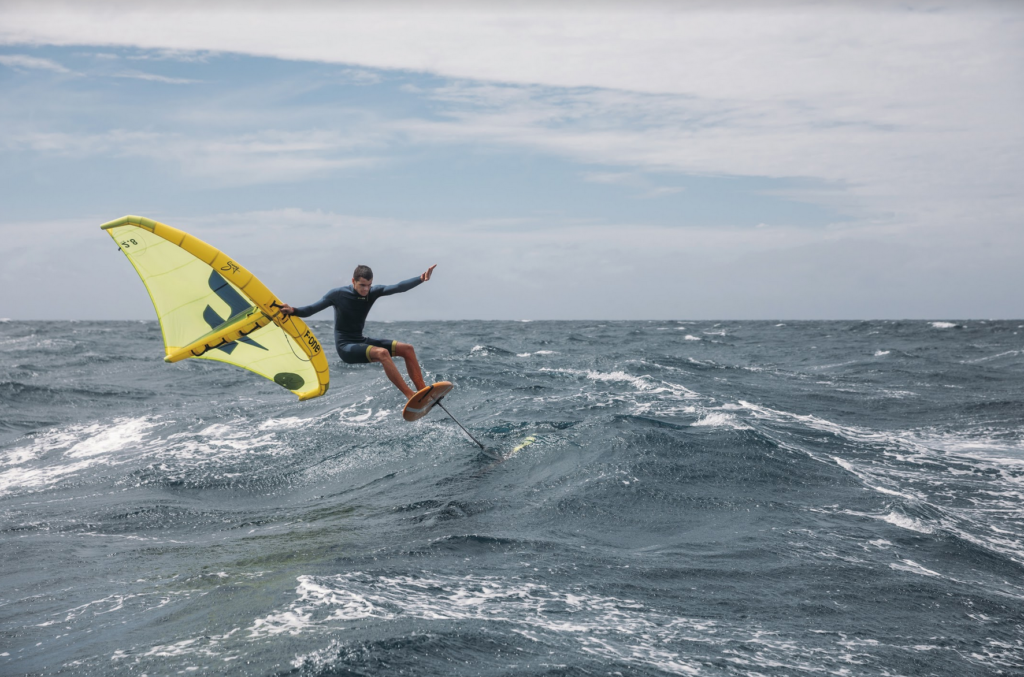 F-One has set me up with a 5’0 Rocket surfboard ($899, all prices from bayareakitesurf.com) and a Gravity Hybrid Carbon 1800 Hydrofoil with a 65cm mast ($1,748). When Conroy and I pull up to the spot, the waves are thigh-high and junky. I wouldn’t bother surfing these waves with my favorite groveler, but Conroy is as ecstatic as a dog in a bacon factory. “Hydrofoiling makes crappy waves really, really fun,” he insists.

The foil board paddles and duck dives like a normal surfboard, but when I catch my first wave, it transforms into a possessed pogo stick and launches me straight into the air. “You have to keep your weight forward,” laughs Conroy as he flies by. He pumps above the surface chop, gliding far out onto the shoulder and carving back into the whitewater, generating speed in places where a traditional surfboard bogs. When the wave finally dribbles down to nothing, he kicks out but doesn’t slow down—he just keeps pumping back to the lineup and straight into another wave. By the time we get out of the water, I still haven’t gotten the hang of the foil board, and I’m shocked to realize that four hours have flown by.

“Surf foiling is the hardest of the foil sports to learn,” Ostermann tells me later. “You should try the wing.” The wing is a hand-held kite that harnesses the power of surface wind, used in conjunction with a hydrofoil board, which taps into associated swell energy in the water. Wingsurfing is similar to kitesurfing; however, according to Ostermann, “the wing is super simple and a lot safer.”

A week later, I meet Bruce Johnson at Coyote Point to demo the F-One Swing, a 5.0m 2 wing ($899), along with a 7’6 Rocket SUP ($2,349) and Gravity Hybrid Carbon 2200 Hydrofoil with a 75cm mast ($1,798). Inside the bay, the water is windblown and waveless, which Johnson says will be best for my first wingsurfing experience. After we pump air into our wings, Johnson gives me a 15-minute tutorial on wingsurfing, helps me carry my setup to the water’s edge, and turns me loose. This is already more user-friendly than the week of kiteboarding lessons I took last year, which I spent encased in a harness and a tangle of lines, literally tied to an instructor. 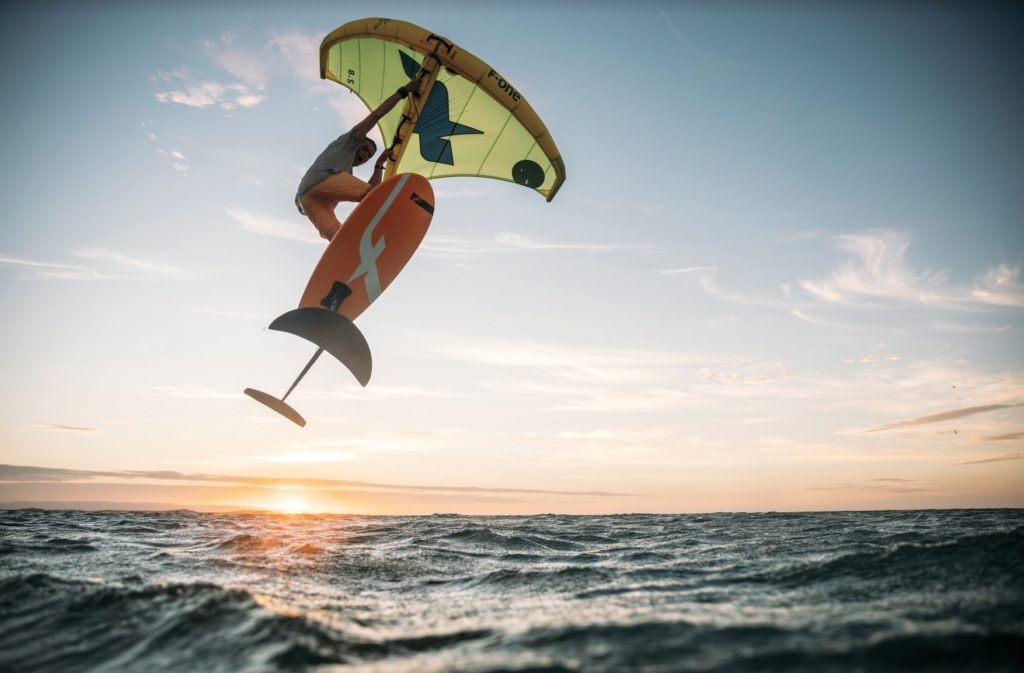 Flying like a bird with a little help from the F-One surf wing. Photo: @ydwer

I kneel on the board, grasp the handles of the wing and lift it into the wind. The board begins to coast along the water and I climb to my feet. Just like that, I am wingsurfing—kind of.

I make three trips downwind, wingsurfing a quarter mile down the beach and then walking back up again, since I haven’t yet learned how to go upwind. Though it’s hard to carry the hydrofoil SUP and the wing flapping in the wind, I feel like I could do this all day, or at least until my arms fall off, because I am stoked in a way that I have not been stoked in a long time. For the second time this week, I lose track of time because I am having a blast in conditions so crappy that I normally wouldn’t have considered surfing at all.

“Typically surfers hate the wind. It’s possible that the wing is that one product that can bridge the gap,” Ostermann predicts. “It seems to me that if there is one moment in time that things are coming together, it’s now.” For more information, contact bayareakitesurf.com.

Taking the road less traveled can make all the dif

There’s a pot of gold at the end of the rainbow.

A friend asked me how much time I’ve been spendi

Another day in paradise🏄‍♀️🌊 This was