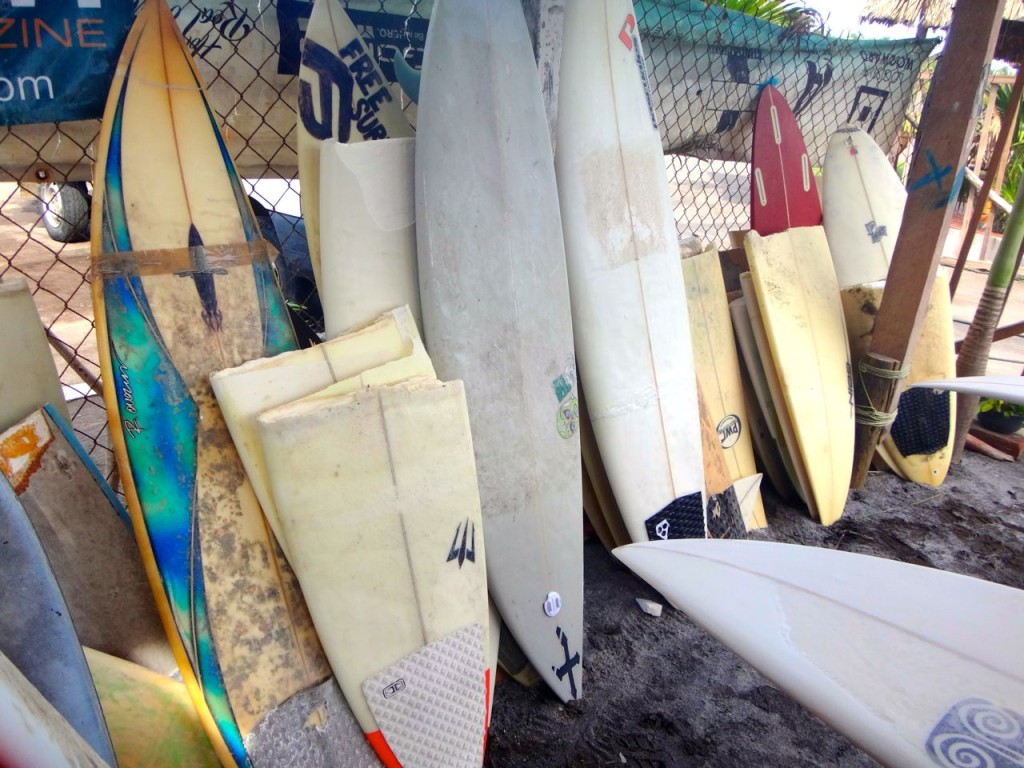 I arrived in Manzanillo to greetings from old friends, all the fixtures that I met when I was here last year are still rooted firmly to this place. Edgar, the owner of the hotel where I stay. Guero, the mischievous Mexican with a twinkle in his eye who starts off each day with a 40oz bottle of Corona for breakfast. Esperanza, originally from Washington, who consistently charges whether the waves are big or small.

Instantaneously, I was invited to a poker game with a buy-in of 100 pesos (about $8 USD), a welcome diversion. The onshore winds of the afternoon had set in; there would be no surfing until morning. The poker game started off with six eager players, winner takes all. “Beat them,” Esperanza whispered to me encouragingly. Hours later, I was still hanging on, facing off with just one other guy. I went all in on a pair of kings, and lost to a pair of aces. Can’t win ‘em all.

The morning dawned on small, glassy barrels. I grabbed my 6’0 short board and caught a few waves with Esperanza. Manzanillo is a heavy beach break, similar to Puerto Escondido, described in Burnt Out and Square One. On the upside are deep barrels and a spread out crowd. On the downside are beatings, endless paddling, and broken boards – lots of them.

Many people choose not to wear a leash because it lessens the chance of a board getting broken; banging into you on a wipeout; pulling you underwater as it “tombstones” or gets pushed by a wave, dragging the attached body along the bottom, the tension causing the board to stand upright like a tombstone. I choose to keep using a leash for the simple fact that I am reluctant to swim in that seething cauldron of water without a flotation device.

On my second day, the swell jumped up several feet and I rode my 6’6 step up, hoping that the extra bit of foam would help me get into the waves a little earlier. Pulling into a barrel, I got shut down and smashed violently. That’s when I felt the tombstone beginning to take effect. The wave had pushed me down against the bottom but my board was caught in front of it, driven forward by a mountain of whitewater catapulting toward the beach. The leash pulled taunt where it was tethered to my leg, holding me in place underneath the weight of the water above me. Without the leash, the wave would just roll over me and I could make it to the surface in a few quick strokes. But the leash was like an anchor, dragging me forward and down, caught in the equilibrium of force created by the wave. Eventually, mercifully, it dissipated. I pushed off of the bottom with my free leg, broke through the surface and gulped air.

Later, examining my board, I saw that the leash plug, embedded in the board for the purpose of attaching a leash, had nearly been pulled out. The intensity exerted on this pressure point had broken the tail in half, lengthwise, all the way through the wooden stringer that runs through the center, destroying the fiberglass on both the top and bottom. I had never seen anything like it. Though I generally do my own repairs, this level of damage was beyond my capabilities. I dropped the board off with Melqui, the resident ding repair guru.

In the following days, the waves grew even larger, and there was a strong current flowing parallel to the beach as steadily as a river. On the biggest day, I grabbed my 7’0 and paddled out. During the 10 minutes it took to get past the shore break, the current swept me to the north about 200 yards. Sitting up on my board, I looked back at my reference points on the shore, the hotels and restaurants, and saw them sweeping by as if on a conveyor belt. Struggling to maintain my position, I paddled south, caught a small wave, and surfaced to see a set looming far outside.

Climbing back onto my board, I paddled half-heartedly toward the impending waves, knowing there was no way I could make it past them. I was going to get a thrashing. As I pushed my board under the first one, it was ripped from my hands, and I was thrown about like a rag doll in a hurricane of churning water and sand. Out of breath, I came up with no time to reel in my board, the next wave was breaking right above my head. I sucked air and swam down toward the bottom, got drilled again. When I surfaced, I saw half a board bobbing pitifully on the end of my leash. Looking toward the shore, I could see the other half washing up on the beach, spit out like a fish bone into a napkin. Placing the chunk of foam still attached to me under my chest, I used it like a kickboard and flopped about awkwardly in a half-swim, half-paddle until my feet touched the sand.

With a piece of board under each arm, I shuffled back shamefully toward the hotel, passing the wide eyes and dim witted inquiries of onlookers. “What happened?” I thought it was obvious, but I guess not. “Broke your board, huh?” Yes, thank you for pointing that out. I said these things in my head, but out loud I said nothing, offering a tight, pinched smile in reply.

The 7’0 was special. I learned to surf on an 8’6 fun board, and when I was ready for something a little smaller, I bought a big wave gun, not knowing any better. I surfed it on all kinds of waves, big and small; took it to Hawaii and Indonesia, hiked 10 miles with it tied to my back through the rural coast of northern California. It was the board on which I first tried to duck dive, do ding repair. I have caught some of the biggest and best waves of my life on that board. My first barrel. On this trip, the magic day at Pavones depicted in Surf Junkie, the heart racing session at Popoyo Outer Reef described in Seduction. It was my go to board in Puerto Escondido.

I considered getting it fixed, but in my experience, a board is never the same after it has been snapped in half. And I’d had it for something like 8 years, much longer than an average board’s life span. It had dents and dings and botched repairs, the sickly yellow pallor of age. It was time to let it go. Everything I experienced with that board, everything I learned from it, will always be with me. Though I used to think of it as magic, it is just a thing. The magic is what it inspires in me.

Edgar took that snapped board off of my hands and let me trade it for the cost of camping. Melqui would fix it and resell it to someone else. And I would have a lighter load to carry, maybe even have space in my life for something new.

The next day, Melqui was finished fixing the 6’6, and when I went to pick it up, I was blown away by the incredible job he’d done repairing it. Over the course of the trip, the board had suffered numerous dings, which I’d patched clumsily with a rough and ready travel kit I’d scraped together in a Ziploc bag. Without sufficient materials and the aid of a power sander, my repairs were functional at best. My board had been pockmarked and lumpy when I’d handed it to Melqui. What he handed back to me was glossy and shining, smooth to the touch. Like new.

In addition to fixing the tail, he’d gone over all the old dings, coating and sanding and polishing them to the point that they were barely discernable. In the case of this board, the damage turned out to be a blessing. I took the beautiful, revived board out for a surf, and within three waves I had cracked a rail. Back to Melqui. Manzanillo turned out to be an expensive stop. But a board is, after all, just a thing. It is meant to be used, bound to get damaged, and eventually, broken.

When I look at the dings on my boards, the scars on my legs, and the still-painful spots in my memories, I have no regrets. Running my fingers over them, I feel where I hit a rock, bounced off the reef, had my heart broken. When I touch the rough, puckered places, I remember that I tried at something, took a risk, did my best. All things are bound to get broken, because I will always use them to the fullest. 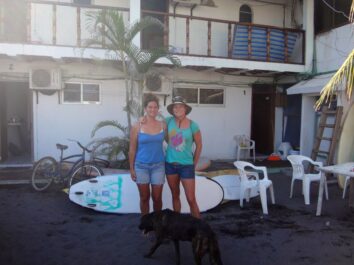 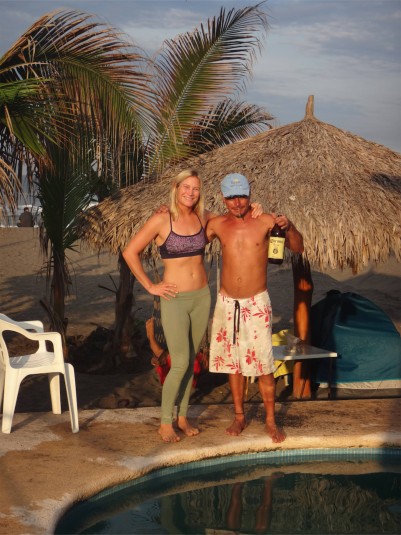 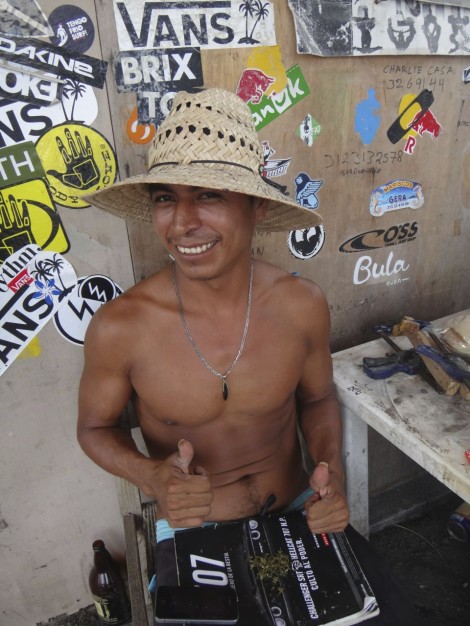 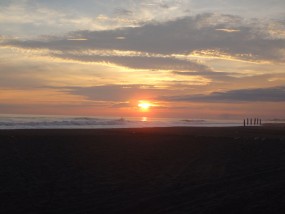 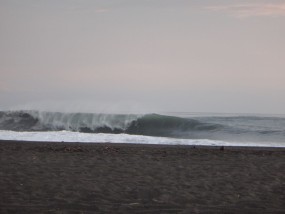 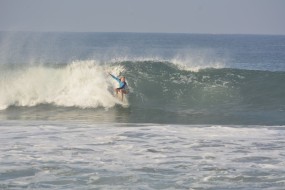 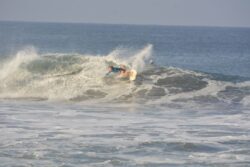 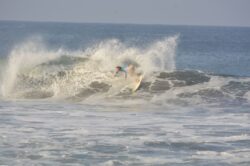 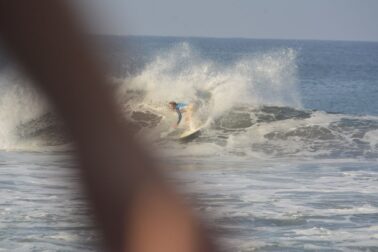 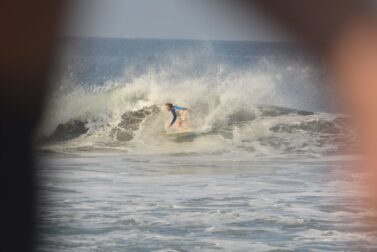 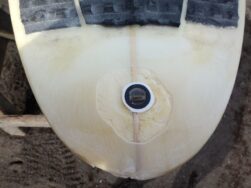 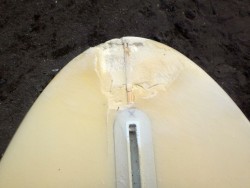 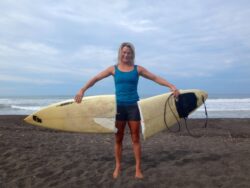